ã€China Aluminum Networkã€‘Al-Li alloy material is a kind of advanced lightweight structural material that has been rapidly developed in aerospace materials in recent years. It has low density, high elastic modulus, high specific strength and specific rigidity, good fatigue resistance, and corrosion resistance. And welding performance and many other excellent comprehensive performance. Using it instead of the conventional high-strength aluminum alloy can reduce the structural quality by 10%-20% and increase the stiffness by 15%-20%. Therefore, it shows a broad application prospect in the aerospace field. 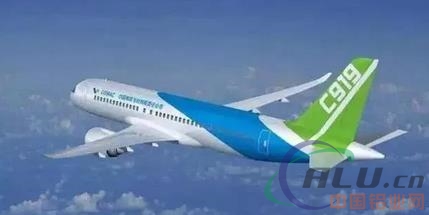 According to the history of development of aluminum-lithium alloys and the characteristics of the components, it can be divided into three stages.

The first stage is the initial stage of development. The period spans from about the 1950s to the early 1960s. Its main representative is the successful 2020 alloy researched by American Alcoa Company in 1957 and applied it to the wing skin and tail stabilizer of the Navy RA-5C military early warning aircraft, achieving a 6% weight loss. The former Soviet Union successfully developed the BAII23 alloy in the 1960s. However, these two alloys have low ductility, high nick sensitivity, and difficulty in processing and production. They cannot meet aviation production and performance requirements and have not achieved further application.

In the late 1980s, the third generation of high-strength weldable aluminum-lithium alloys represented by the American Weldalite 049 series alloys were successively developed, and have been successfully applied in aerospace and other fields. At present, new third-generation aluminum-lithium alloys are developing toward super-strong, super-tough, ultra-low density, among which there are more researches on high-strength weldable alloys and low-anisotropy alloys. In addition, aluminum-lithium metal matrix composites with isotropic, particle or whisker SiC ceramics as reinforcements have been developed. Their elastic moduli reach 130 GPa, becoming a strong competitor for other composite materials in the aerospace field. .

2. Application of Al-Li alloy in aerospace and its development trend

In 1994, to solve the overweight problem of the "Endeavour" space shuttle's outer tank, Lockheed Martin and Reynolds Metals developed a new type of 2195 material to replace the previous 2219 alloy. The density of this alloy is 5% lighter than that of the 2219 alloy, and its strength is 30% higher than the latter. With the integrated welded structure tank made of 2195, the weight is reduced by 3405kg. The weight of the liquid hydrogen tank is 1907kg, and the liquid oxygen tank is 736kg. The direct economic benefit is nearly 75 million US dollars. Therefore, it is called a superlight weight tank. ). Russia has always been a leader in the research, production and application of aluminum-lithium alloys. In order to increase the load capacity, the outer fuel tank of the space shuttle is made of aluminum-lithium alloy, and the cryogenic tank of the "Energy" launch vehicle is used. Made of 1460 Al-Li alloy.

In aviation, many advanced fighter jets and civil aircraft have chosen aluminum-lithium alloys. In 1988, Lockheed Martin Combat Aircraft Systems, Aircraft Systems, and Reynolds Metals Co., Ltd. jointly developed a plan to develop the application of 2197 alloys - the use of its slabs to make fighter jet bulkhead decks. In 1996, the U.S. Air Force F-16 began to use this alloy plate for the manufacture of aft decks and other components.

In addition to the United States, other countries, such as Russia, the United Kingdom, and France, are actively promoting the use of aluminum-lithium alloys in aerospace vehicles: 25% of Westland EH101 helicopters are made of 8090 alloy. The total quality of the Rafele fighter jets is about 15% lower; Franceâ€™s third-generation Rafele fighter plans to use aluminum-lithium alloys to make its structural framework; Russia in Jac-36, Su-27, Su-36, MiG-29, MiG-33 and other fighter aircraft have a large number of components are made of aluminum lithium alloy.

The American Weldalite 049 alloy has different superplasticity. The solution can reach 829% at 507Â°C without solution pressure and 4Ã—10-3 strain rate. This strain rate is significantly higher than the strain rate of other aluminum alloys, which is of great significance for solving the problem of low superplastic process speed. Russia has used SPF technology to process many of the aircraft's parts for the 1420, and some of them have dimensions of 1200mm x 600mm.

Spinning technology is an advanced technology that combines the advantages of forging, extrusion, drawing, bending and other processes. Shear spinning is a new type of spinning technology developed on the basis of traditional spinning technology in recent years. It does not change the outer diameter of the blank but changes its thickness to realize the spinning method of manufacturing various axisymmetric thin-walled parts such as cones ( Tapered Thin Spinning). This shaping method is characterized by less stress on the rotating wheel, half-cone angle and wall thickness affect each other, smooth material flow, good surface roughness and high forming accuracy, and can be easily formed, stretched, spin-doughly formed s material. Many of the Al-Li alloy components on the spacecraft are hollow shell structures that are particularly suited for spinning applications. The more typical parts are the domes of cryogenic tanks for launch vehicles.

The dome cover of the United States "Hercules" launch vehicle is made of three Weldalite 049 plates with a diameter of 0.65m and a thickness of 10.7mm. One of the middle parts is welded by VPPA, and the stress is removed after 343Â°C/4h. During spinning, all the blanks are heated and maintained at 317Â°C by flame; after forming, they are solution treated at 505Â°C/0.5h. Water quenching; after artificial aging at 177Â°C/18h, the tensile strength at room temperature was measured to be about 600 MPa, and increased to 700 MPa at -196Â°C, and the fracture toughness was good. The dome lid of the outer tank of the â€œEndeavourâ€ space shuttle also uses the same spinning technology, and advanced shear spinning technology is adopted in the barrel section of the outer tank.

Al-Li alloys, especially the Weldalite series alloys and 1420 alloys, have good forging properties. The die forgings made from them do not crack. This has been confirmed by more than 150 forgings. Therefore, applying it to the aerospace industry has broad prospects. Roll forging is a new type of near-net forming technology that has been developed in recent years. The material is subjected to plastic deformation under the action of a pair of counter-rotating dies to obtain the required plastic forming process for forgings or forgings. The development of roll forging has two important areas.

The first is to realize volume distribution and preforming in the production of long-shaft forgings, reduce the forming load, form a precision roll forging complex production line, and use less investment to mass produce complex forgings. The second is precision roll forging technology, including cold finish roll technology. There are good development prospects in the precision forming of sheet-type parts, such as advantages in blade forming and variable-section leaf springs. In recent years, both directions of roll forging have been successfully applied to annular forgings and ribbed sheet metal parts of aluminum-lithium alloys. Such as "Yi Jin" spacecraft outer tank "Y" frame and docking ring.

Welding is one of the main processes for manufacturing aluminum-lithium alloy aerospace products such as tanks, warhead shells, and the like. Former Soviet Union researched the 1420 alloy's welding time for more than 10 years, and carried out in-depth theoretical research and discussion from the welding process method, welding organization, welding performance and post-weld heat treatment. In the 1980s, research on the weldability of 1460 high-strength alloys was also carried out. The 1460 alloys using tungsten hydrogen arc welding (GTAW) and vacuum electron beam welding (EB) processes have been successfully used to make "Energy" rocket carrier tanks.

Welding of aluminum-lithium alloys in the United States, Europe, and other countries began in the early 1980s. Unlike Russia, the United States places special emphasis on welding cracks. The welding methods used in the United States include GTAW, EB, and VPPA (Variable Polar Plasma Arc Welding), and the outer space tank manufactured by Weldalite 049 alloy is welded by VPPA. Alcoa uses EB welding on 12.7mm thick 2090 alloy plate. Welding, penetration rate of 100%.

In recent years, two new welding technologies: friction stir welding and laser welding technology have also begun to be applied to the research of aluminum-lithium alloy manufacturing. Lockheed Martin of the United States used friction stir welding on 2.3-8.5m thick 2195AI-Li alloy and 2219 alloy plate welding, found joint strength can be increased by 15% - 26%, the fracture toughness of the weld increased by 30%, The plasticity is increased by a factor of two, and the microstructure of the weld is extremely fine. After more than 20 years of efforts, Airbus has used laser welding technology to manufacture dual-beam â€œTâ€ structures for large passenger aircraft. It has been successfully applied to passenger aircraft fuselage panels such as the A330, A340 and A380.

The main advantages of aluminum-lithium alloys are low density, high specific modulus, and strong corrosion resistance. The overall performance is superior to conventional high-strength aluminum alloys. However, in the variable-amplitude fatigue test based on compressive stress, this advantage of aluminum-lithium alloy no longer exists. The main reason is that its peak-strength material has short-to-transverse plasticity and fracture toughness, severe anisotropy, and artificial aging. It is necessary to apply a certain amount of cold work before reaching the peak performance. When the fatigue cracks have a fine microscopic level, the expansion speed is significantly faster. In order to improve the fatigue and fracture toughness properties of aluminum-lithium alloys, NASA conducted a lot of research work on the new 2195 aluminum-lithium alloy and developed two-stage, three-level, and five-stage heat treatment processes to make room temperature fracture of the 2195 alloy. Toughness and fatigue performance increased by nearly 30%, while strength was comparable to traditional aging.

(2) Aluminum-lithium alloys On the basis of gradually maturing technologies such as casting and rolling, advanced processing and manufacturing technologies have been continuously expanded, and new processes such as superplastic forming, spinning, and roll forging welding have been continuously innovated, and significant application results have been achieved. However, due to its own performance limitations, room-temperature forming capabilities are still difficult. The application of aluminum-lithium alloys in large passenger aircrafts is mainly based on cold forming. Therefore, the solution and realization of room temperature sheet metal forming and heat treatment processes for complex structural components are the key technologies and development directions for the use of large-scale passenger aircraft aluminum-lithium alloys in the future. Constantly develop new technologies on the basis of traditional techniques to improve forming accuracy, efficiency and quality.

Next: "Diamond and Abrasives Engineering" magazine won the first-grade journal of Henan Province